Recently, because the person dearest to me has been unwell, I have been spending more time than I usually would hanging around hospitals.

Never one for whom hospitals have invited the most pleasant thoughts the experience of going in as a visitor everyday has, oddly, become something that I look forward to.

This could just be of course, that it is Nonna, my grandmother, who is also the person dearest to me who is in hospital at the moment, and that the house feels weird and slightly creepy without her. But I suspect that as well as this, there is something else going on that has made me oddly accustomed to, and almost content in the quiet and sparsely furnished rooms she has been living in for the past two weeks.

The first room she was admitted to was on the north-west corner on the first floor of the hospital, all the way down the hallway tucked away in a little corner where nurses would store their sharps trolleys and towels. Just out of the way of the main walkway. From the window next to her bed one had a pretty good view over the northern suburbs, which only improved when evening came and the sky darkened around the glimmering lights below. I felt tucked away here, in a room that was simultaneously right in the middle of the city, but also at a comfortable distance from it. It was only when I’d venture downstairs again to the busy hospital lobby, amidst the sounds and rush of people, that I would remember that hospitals are not usually peaceful places.

The second room Nonna was moved to was similar to the first, although this time on the ninth floor and not in a corner but right next to the walkway where doctors, nurses, kitchen staff, and patients would pass every few minutes. The funny thing was that again, from inside the room they all seemed far away and distant.

I realise that I might sound insensitive, or like I am sentimentalising what is for most people an unpleasant experience; being in hospital. No one really enjoys it. Even as I sat dwelling on how unexpectedly content I found myself in the room with Nonna – she with her eyes closed and resting after her operation, me scribbling away at a colouring book – this thought was in my mind.

Hospitals are places where we’re reminded of our mortality, and reminded of the fragility of our bodies. After all hospitals had not very long ago been places that I liked very fervently, to avoid. I tried to think therefore, more carefully about what it was exactly that made me feel okay in this room. And oddly enough, at home one night on the internet, I stumbled across an article that helped me figure this out.

Reviewing a book by Professor Gordon Campbell of the University of Leicester, Allison Meier informs us about ‘Ornamental Hermits’ or, real people who during the 18th century were paid to dress like Druids:

While some gardeners might now throw in a gnome statue among their flowers and shrubberies, back in the 18th century wealthy estate owners were hiring real people to dress as druids, grow their hair long, and not wash for years. These hired hermits would lodge in shacks, caves, and other hermitages constructed in a rustic manner in rambling gardens.

Upon reading this, the sentimental and nostalgic part of me thought instantly that this was well, pretty awesome. Who wouldn’t want to live in a cave and contemplate the universe in a snazzy costume? But then I thought about it properly and knew that it would be horrible also, to be contractually obliged to live in someone’s garden without washing or talking to anyone for seven years, as was stipulated in a 1797 advertisement for anyone wishing to become a decorative hermit:

The hermit is never to leave the place, or hold conversation with anyone for seven years during which he is neither to wash himself or cleanse himself in any way whatever, but is to let his hair and nails both on hands and feet, grow as long as nature will permit them. 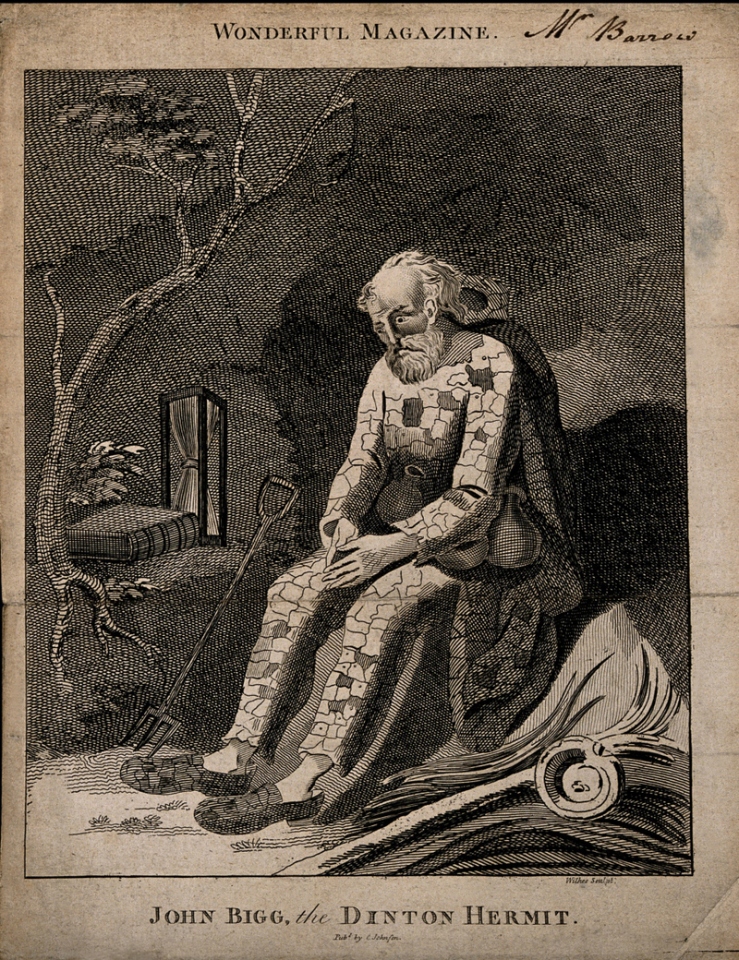 Distinctly unappealing. And yet…still some part of me thought there was something novel about the whole idea. I tried again to figure out the appeal of such a strange, and in reality, difficult situation, and when I re-read the article, I finally got it.

How the live-in hermit came to be a fashionable touch to a splendid garden goes back to the Roman emperor Hadrian with his villa at Tivoli, which included a small lake with a structure in it built for one person to retreat.

Retreat. The appeal of what in reality would have been a demanding, smelly, and probably socially ambiguous mode of employment, and the appeal of a room in which my grandmother – even though she’s getting better – was suffering, was in the fact that both settings represent ways to temporarily retreat from the world and the pettier concerns that take up a part of everyday life. In settings like a hospital room, or a druids’ cave, one is temporarily closed off from the hurried pace of the wider world and permitted therefore to look at it differently for a moment. The things that had been worrying yesterday now seem petty in relation to the kinds of concerns a stay in hospital brings to one and one’s loved ones. And living in a cave, living so differently from those immediately around you would likely precipitate the same kind of re-exmination of one’s decisions about what is and what is not valuable in life. The ability to do this, to temporarily retreat in a way that is beneficial to one’s long term state of mind, has a great deal I suspect, to do with silence.

There is a serious kind of silence that strips away all the other noises and concerns raging around us every day. One finds it sometimes in empty stairwells, the top floors of university libraries, and silent forests with a view over the suburbs.

It can however, be difficult to come by. Elevators have music in them now, our phones in our pockets are closer to our hearts now than even our legs, promising entertainment and distraction if we should find ourselves waiting in a queue with no one to talk to. Even at the petrol station sometimes there is a television screen built into the gas pump telling us about the latest Toyota Hybrid or the best quality gardening rakes available now at your closest Bunnings. Short of helping us, the difficulty of finding a quiet moment in the day can keep us distracted from and unfocused on our own thoughts when in reality in small doses, temporary patches of silence – proper silence in which we are able to hear our own and not someone else’s thoughts – can break up the day into manageable sections, and allow us to refocus on the more important tasks in our schedule. Like taking the time to visit the people around us who might need cheering up, or rescheduling a meeting with a good friend which has been put off for far too long. But silence, short of being seen as a helpful thing, has almost become a frightening thing because of how rare it is.

So while hospitals are difficult places, they are also places that force us into a cocoon of silence that I found remarkably helpful in assessing what was going on in my own head without the distraction of the world beyond the window. It is worth noticing how influential different surroundings can be in guiding our understanding of reality, for better or for worse, and it is worth changing this when necessary. This doesn’t have to mean building a druid’s cave in your backyard, or hiring a human hermit to remind you of how impressionable we are to the more shallow distractions of every day, but merely taking a moment or two – perhaps a day or an afternoon – to retreat, every now and then from your own timetable. Short of wasting time this ensures that the time we do have will be used thoughtfully and in relation to who and what, is most important in our lives.

On a side note, anyone who lives near Prahran, there is a replica-druid cave in a church just off Chapel St. Forgive me for the moment, for I do not know the name of it, but I will investigate further and find out. In the meantime, if you can find it, I encourage you to sneak in there and ponder the universe from time to time 🙂 Otherwise, take comfort from this man doing the same thing:

The Architecture of Happiness by Alain De Botton. A book that teaches us how influential our surroundings can be upon our state of mind.